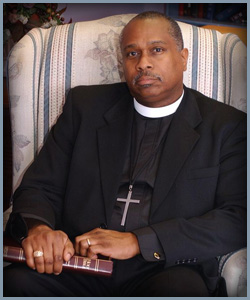 Superintendent Campbell received a degree in Business Management from Alfred State University; where he met his wife, Joyce Murphy. They married in 1974 and from this union the Lord blessed them with two sons, Matthew (NaKiesha), David (Jessica), and one daughter, Rachel and three grandchildren, Genesis Marie, Marcus Victor, Isaiah David and Grace Noelle.

With the Lord’s direction in 1986, Pastor Campbell accepted a business transfer from IBM/Lockheed Martin Federal Systems (his former employer), and moved from Owego, New York to Manassas, Virginia where he was employed for 28 years. His last position was a Senior Subcontract Administrator.

Superintendent Tony H. Campbell is Pastor and Founder of “Yeshua” Church Of God In Christ (C.O.G.I.C.).  “Yeshua” is Hebrew for “JESUS” Christ Our Savior.  He accepted the call to Pastor after much prayer and fasting.   On July 5, 1987 “Yeshua” first opened its doors as a Bible Study with 13 members in attendance. And the Lord added to the church such as should be saved.

Under the leadership of General Board Member Bishop Ted Thomas Sr.; Prelate of the First Jurisdiction of Virginia Pastor Campbell was appointed Administrative Assistant to the Bishop, August 2011. In addition he currently serves as the Superintendent of The Great Northern District since August 2006, with 11 churches currently, Member Ordination Board, Chairman of the State Trustee Board since 1997, Chairman of the State Retreat from 1992 to 2012, Chairman of the Steering Committee to elect Bishop Ted Thomas to the General Board 2008 and 2012 and Co-Chairman of the State Leadership Summit. He was appointed as Board Member to the International COGIC Publishing House in 2013 and appointed as Co-Chairman for the Inaugural Banquet for Bishop Thomas to the General Board. He formerly served in the following capacities: Chairman Ordination Board from 1994 to 2009, a delegate to the C.O.G.I.C. International Constitutional Convention in St. Louis, MO. in 2003, Chairman of Bishop Ted Thomas’ Silver Anniversary-Save Africa’s Children committee in 2009. During Campbell’s pastorship he has been invited to preach at various ceremonies and anniversaries from New York to California.

The Lord blessed him as a businessman and on March 16, 1999, he founded Butch Enterprises Inc. and later sold the company in February 2006. This strategic action freed Superintendent Campbell to work full time in ministry, and humbly served his community as a Youth Mentor under the Jennie Dean Elementary School Mentor-Protégée program; taught a Religion & Philosophy Seminar at Strayer University in Woodbridge, VA; and was appointed by the Manassas City Council to work on traffic claiming measures in the community.

Under Campbell’s leadership, the Church has submitted for ordination thirteen Elders (ten of which have begun new churches); and has licensed nineteen Missionaries. Currently there are five ordained Elders, one Minister, six Deacons, nine licensed Missionaries, and five Church Mothers.

Other auxiliaries and units were established to enhance the ministry of God. “YESHUA” is active in various community outreach ministries including; COGIC Urban Initiative, All Saints Bible College, Jail Ministry, Hospital & Nursing Home Visitation; Van Ministry, Door-to-Door Evangelism, Pews in the Street Tent Ministry, Television Ministry, Youth For Tomorrow, Home & Foreign Missions, Seed of Hope Homeless Ministry and The Bread Of Life Food Pantry, including Government USDA, serving the community of Manassas the 2nd Saturday of every month. The Bread Of Life Food Pantry can be found at: www.yeshuacogicfoodpantry.com